It’s time for change! Rather than sticking to the one-off format that has been the Brew Guide bread and butter, your new Guide is going to consist of new breweries, updates of past breweries, brews that you need to try, and craft beer places you need to visit. I may even throw in a couple upcoming events. Basically, it’ll be a one stop shop for every type of post I’ve done before!

END_OF_DOCUMENT_TOKEN_TO_BE_REPLACED

“You have 30 days to renew your domain”

Nothing like an email that you owe money to remind you that you’ve been punishing your liver in the name of hobby journalism for a whole year! Since I decided to spend January sober (I can hear all your boos already), obviously there hasn’t been much to post about. But rather than letting my already questionable writing ability get rusty, I’m going to run down the past year; giving you the facts, handing out some obviously super important superlatives and then filling you in on what to expect in the future for the Brew Guide!

END_OF_DOCUMENT_TOKEN_TO_BE_REPLACED

I should apologize for something. It’s been a real long time since I’ve given a Marvel update. Don’t worry though, I’ve still been on top of it!

Spiderman was a fantastic movie in case you somehow missed it. Tom Holland is waaaay better than Andrew Garfield and Michael Keaton sure can play a bird like no other. And then the ComicCon trailers for Thor & Defenders came out and look damn amazing. It’s a good time to be a Marvel fan, so much great stuff is happening.

And this concludes our Marvel minute. Now onto the beer with Newport Storm!

END_OF_DOCUMENT_TOKEN_TO_BE_REPLACED

Quick reminder, there’s only a short time left to buy your Brew Guide “I Drink New England” T with free priority shipping! Go here and enter the promo code IDRINKNE before Friday at midnight and you’re golden. Show your love for New England beer and support your favorite wandering lush in the process!

END_OF_DOCUMENT_TOKEN_TO_BE_REPLACED 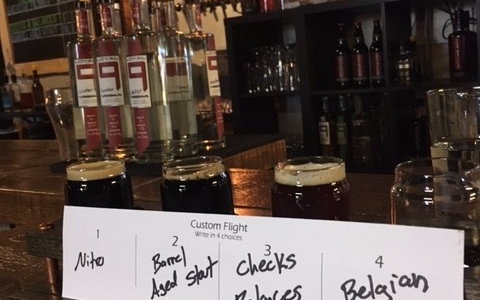 Howdy Folks! This week I want to open the floor to you savages. I’m heading to Connecticut, New Hampshire, Vermont and Maine, most likely all by the end of this month. Since most of them are foreign territories (except NH and parts of CT), I’m looking for some suggestions as to what brewery I should be headed next. So comment on here, Facebook, Instagram or email me nebrewguide@gmail.com and give me a reason to visit!

So let’s wrap up the Kingston/Kingstown trip from last week with a stop into Sons of Liberty Spirits…because they have beer too!

END_OF_DOCUMENT_TOKEN_TO_BE_REPLACED

Tonight’s the NFL draft and the Patriot’s currently have no picks until Saturday. We don’t have to really care about the draft at all for two days but I will say, the best part of the draft is watching that one presumed high 1st round draft pick slide into the 2nd. Especially if he went they are at the draft. Nothing is more sad/amusing to me than the sit through the whole first round, have to come back for a second day in a much emptier waiting room and after all that, have to play for the Jets. Looking at you Geno Smith. Now that’s drama worth watching!

After stuffing our faceholes full of donuts over at Whalers on Sunday, we decided to make a day of it and see what else was in the area (After all, donuts are always a nice way to set the foundation for some day drinking.). So, we took a nice 15 minute drive over to Proclamation to see what’s up over there.

END_OF_DOCUMENT_TOKEN_TO_BE_REPLACED

During the work week, I’m really a pretty healthy guy. I stick to mostly a “Slow Carb” style diet popularized by Tim Ferriss, one of my two internet life coaches (Joe Rogan being the other). The reason I chose follow this diet was easy, it allows you to be an absolute pig for one day a week. It makes days like the Donuts and Drafts event I attended on Sunday not hurt my girlish figure as much! Gotta keep this temple tight!

And that’s where we start the week. Here’s what to expect from Whalers Brewing, minus the donuts, you missed that boat!

END_OF_DOCUMENT_TOKEN_TO_BE_REPLACED

Love the news that was bouncing around that Marshawn Lynch has “privately discussed” joining the Patriots if any deal with the Raiders falls through. I don’t care that he’s been out for a year, he’d still be a harder runner than Blount and he hates talking to the media. Sounds like the perfect Patriots player to me. How great would it be to see him finally have a nice Superbowl winning 1 yard touchdown?

We’re splitting time this week in RI and MA. Off to the Bucket we go for round 1!

END_OF_DOCUMENT_TOKEN_TO_BE_REPLACED

Saturday Night I hit up the Colosseum in Providence to check out Arcade Revival, a pop up old school arcade game set up that was going on all weekend that also happened to feature Revival Brewing. I recommend giving them a follow, that event was a bunch of fun, there was never a long wait for a game, and the people watching was fantastic. I believe I saw Jareth the Goblin King there, it was uncanny.

And that’s the last bit of RI I had. For the next two weeks,  I’m bringing it back home to Mass for 4 big features. There are now over 100 visitable breweries in the state according to Mass Brew Bros, so I’ve got a lot of work cut out for me.

So lets start super local for me, with Black Hat Brew Works.

END_OF_DOCUMENT_TOKEN_TO_BE_REPLACED

A national crisis was finally solved this weekend as Tom Brady’s Super Bowl jersey has been returned! While the video is incredible, just showing how ballsy the thief was, the more interesting thing was that it had before two years earlier and Tom didn’t seem to even care! It’s like Tom was the hot girl in high school and the jersey was me, the jersey being as equally sweaty and dirty. I’m glad he got them back though, since he said something good will come from it. Maybe he’ll auction it for charity, and if he does, The N.E. Brew Guide Foundation will gladly accept the funding.

And here we are, another trip to Rhody for your Wednesday guide.