It’s time for change! Rather than sticking to the one-off format that has been the Brew Guide bread and butter, your new Guide is going to consist of new breweries, updates of past breweries, brews that you need to try, and craft beer places you need to visit. I may even throw in a couple upcoming events. Basically, it’ll be a one stop shop for every type of post I’ve done before!

February brought a whole lot of time spent around Rhode Island, thanks to the lady purchasing RI Food Fights #BestDonutsRI passport. Each passport had 19 coupons good for one donut at various RI establishments, and she wanted to make sure we took full advantage of them. Since relationships are a fun balancing act, she got to get donuts and I got to hit up breweries. Might have been the easiest compromise made, ever.

First stop of the month was Tilted Barn in Exeter. The small brewery with a huge following has made some serious waves in the craft beer community in a relatively short time. It’s not uncommon to travel down the long dirt driveway and see a long line of eager fans waiting for their allotments. Luckily, we were arriving an hour before closing on a Saturday, and if I have any advice to anyone going there, this is the best time to go. There was a minimal line, if any, and all but one beer was available to purchase a pour or cans of. Going into the upstairs of the barn, there was room to breathe and enjoy our pours. Unless it’s a limited can release day, make sure you stop in later for sure. That being said, you should absolutely make them a stop in your brewery travels. All the beers I’ve had the pleasure of trying have been mighty tasty, my favorite of which is their Cactus DIPA; Probably one of my favorite IPA’s yet. You’d be hard pressed to find one that’s smoother or juicier. On a final note, please remember that the folks at Tilted Barn are basically welcoming you into their home, which is a mere footsteps from the barn. Please be respectful of their farm, and especially their dogs! Belows slideshow is compiled over both of our trips there, so you can see the difference of a line/ no line situation.

Rather then run straight home to Mass from Tilted, we opted to see Proclamation Ale Co.‘s new digs in Warwick. I was a big fan of their previous “pallet fortress” taproom in W. Kingston, so they had a lot to live up to (original Brewguide post, in case you missed it). Happy to say, their new place is expansive and gorgeous. Big bar, plenty of seating, a whole bunch of coin-op games, their cool color pencil “Proc” sign and even a nod to the previous taproom with pallet wall. All that along with more brewing capacity and a barrel aging room! Only issue I had was that it’s getting too popular, so only 2 beers were available on tap when we got there. I enjoyed a very good Ethereous (don’t listen to anyone online saying it tastes different, it’s delicious) and a fresh waffle with cookie butter from Burgundian (highly recommend you try them). So, as you can clearly see, Proclamation is killing it right now.

Fast forward one week, and here we are back in Providence. First, a stop at Knead, the donut shop that won the “RI Food Fight” by a landslide as far as I was concerned. Only other RI donut I’ve had that gives PVDonuts a run for its money. 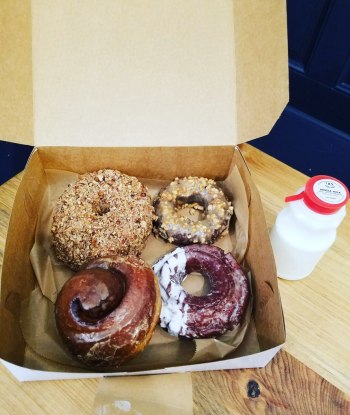 Once that scrumptious base was set, it was time to get back to the beer! It was now time to finally visit a place I’ve heard so much about, Long Live Beerworks. Arriving about 15 minutes after opening, I was surprised to see a just small line; I had heard that things could get a bit crazy on Saturdays. Turns out, the line in this case was more due to the taproom being what realtors normally refer to as “cozy”; an L-shaped bar, couple of high top’s, bar-top ledges wrapping both usable walls, as well as a small patio area are there to maximize the usage of the space available and all that space was already mostly occupied. Yup, a full house happens that quickly. We grabbed a small pour of the 3 available beers, a four pack of Attitude, 2 “souvenir” tulip glasses and found a little spot on the wall. All three beers, just wow! Nitro Kart and Attitude are both killer brews, but that All Seeing Eye is fire (as the kids would say). Great balance of a hazy juicy DIPA while maintaining a hoppiness that other juice bombs can tend to forget. Long Live immediately went from an unknown to a place I can’t wait to hit up again, especially looking forward to seeing them in a bigger place in the future!

To put a wrap on RI, after a quick lunch (more on that later), we stopped into Revival for the 2018 release of their Bourbon Barrel Juliett Imperial Stout. The taproom was packed and what was supposed to be a single pour and pick up turned into a hang. There were 4 variations of Juliett on tap, including an interestingly good New England style version, so how could I resist? In a world where barrel aging has become more and more common, standing out from that once sparse crowd can be hard. Juliett does the barrel aging well, where the booziness only accentuated the flavors of stout without being overwhelming you, making for a slightly sweet and very smooth treat. Another great beer from an always consistent Revival Brewing! 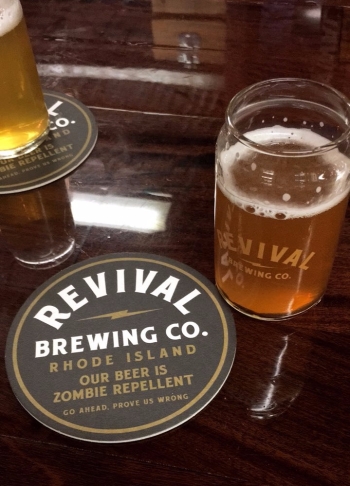 Troop PVD is a newcomer to Providence that has a ton going for it. The place is fully entrenched in a 90’s hip-hop vibe; sprawling graffiti filled walls, bar stool backs made of skateboards, stacks of boomboxes, a colorful wicker furniture lounge area and, of course, shout out’s to Wu-Tang. The staff was great, very helpful and attentive, and the food was amazing. The Korean Steak sandwich was tender and savory, and the lady thoroughly enjoyed her street noodles. As the prerequisite implies, the beer selection here is full of great local craft breweries, with a slight bias towards Revival Brewing; since you know, the same guy owns both places and all. I was impressed with what came of the limited lunch menu, so I’m even more excited to see what dinner will bring next time through! Our pics below don’t do it justice, so to get a real feel of it, check out their Insta (Click Here) and stop in next time you’re in Olneyville. 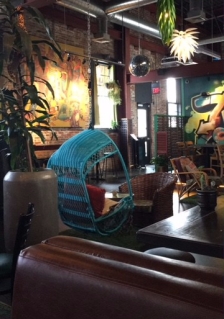 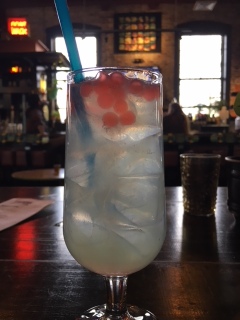 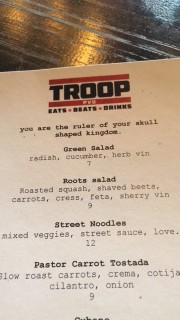 The newest cider in Downeast’s pilot batch series, Dark & Stormy has all the flavors of my favorite mixed drink. This dark brown cider has a strong ginger backbone & hints of lime, with the apples providing the sweetness while the aging in the rum barrel provides a nice, smooth booziness. The lady brought home a 32 oz. growler, and it wasn’t long for this world once it got cracked. Luckily, she also took a picture too (unfortunately with a dumb Insta sticker) while she was there, since it was gone too quickly once it got home. 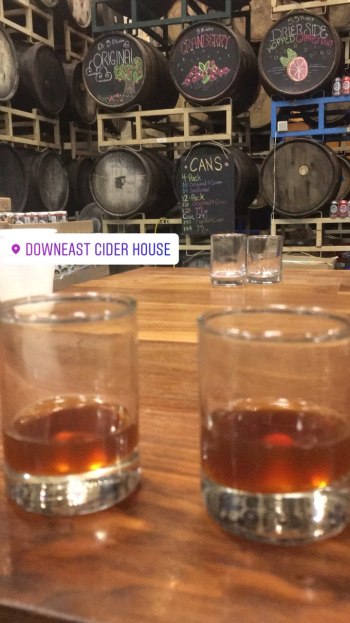 Brew Guide is celebrating one of the best drinking holidays one week early! Join us at Harpoon’s St. Patrick’s Day festival for live music all day, tasty brews and good vibes.

Have a big event coming up? Let me know so I can feature it here! Contact me @ nebrewguide@gmail.com.