“You have 30 days to renew your domain”

Nothing like an email that you owe money to remind you that you’ve been punishing your liver in the name of hobby journalism for a whole year! Since I decided to spend January sober (I can hear all your boos already), obviously there hasn’t been much to post about. But rather than letting my already questionable writing ability get rusty, I’m going to run down the past year; giving you the facts, handing out some obviously super important superlatives and then filling you in on what to expect in the future for the Brew Guide!

51 breweries received the very prestigious honor of the brew guide treatment. My home state of Massachusetts led the pack with 17 visits, 11 from Rhode Island, 7 in New Hampshire, 6 each in Maine & Vermont and Connecticut trails with 4. Throughout my adventures there were also many visits to many breweries that slipped through the cracks, mostly due to laziness or lack of photographic evidence. I’ll be better in 2018, I swear.

And for an really fascinating note, let talk about who’s posts garnered the most interest…

The post with the most views is Treehouse, and that shouldn’t surprise anyone; they’re the craft beer juggernaut. After that, the top 5 is mostly a  bunch of the smaller places; Crooked Current in Pawtucket, RI, Bog Iron in Norton, MA, and the dual post of Battery Steele/Austin Street in Portland, ME.  It’s awesome seeing people getting behind these smaller places and great to see that it’s not just the big guys that move the needle. For full disclosure, the other brewery in the top 5 was Bissell Bros., who deserve all the hype they receive.

Without question, the best destination for beer had to be Portland. Bissell Bros., Foundation, Allagash, Battery Steel & Austin Street are all fantastic spots and all so damn close it’s almost not fair to other cities. I can’t wait until my next trip up there to check out the ones I still haven’t been to, and there still plenty. See you fine Maine folks in the spring for sure. 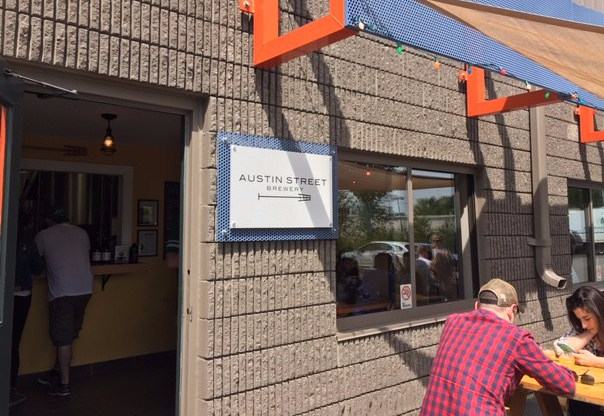 Now the judging starts to get difficult, as five events in particular jump into my head immediately. South Shore Farmer Beer Fest grew in it’s second year and was a great event even with the unfortunate crummy weather. The Bacon and Beer Jamboree in Plymouth was great, with tons of local brews and sheet pans of delicious bacon throughout the event. Drink Craft Beer’s Beer and BBQ in Boston was equally impressive with their line up of breweries and some of the best BBQ in the area. Almost inevitably, it all came down to two BeerAdvocate events. While I enjoyed the hell out of Beer Meets Wood in Portland (next day hangover be damned), the Microbrew Invitational gets my nod as the best event last year, since it was all about highlighting the smaller spots. Got to learn about a bunch of new places and finally try a bunch of really fantastic breweries not normally available in the area.

Favorite Beer of The Year

I hope you weren’t expecting an IPA, because you’d be sorely mistaken. While there were many that were outright incredible ones (Treehouse’s Alter Ego, Tilted Barn’s Cactus, Aeronaut’s Double Hop Hop and Bissell’s Reciprocal to name a few), IPA fatigue became a real thing as the year progressed. So instead I’m going with the beer that most commonly ended up back in my fridge, and that’s Barrel House Z‘s Townie Strong Irish Ale. Whether it’s ITB (In The Buff, non-aged) or it’s many barrel aged variations (rum barrel being my personal favorite), it’s a beer I can’t stop (and won’t stop) coming back to. Just smooth malty goodness and a flavor that never gets old.

Best Brewery to Grab a Bite

Before I began this site I thought, for no real good reason, that if a brewery was part of a restaurant, that either the food or the beer wouldn’t be that good. Boy, was proven wrong time and again this year. I went to about 10 such places and it wasn’t an easy decision by any means to decide on a favorite. In the end, I’m had to go with Throwback Brewery in Hampton, NH with a their delicious local farm to table menu and a unique and equally tasty variety of beers. It checked off all the boxes necessary to narrowly beat out some tough competition. All around, NH definitely leads the way when it comes to restaurant breweries in my experience.

You’re first look when you get in.

51 breweries is a lot to choose a favorite from. There are a number of things one should consider in selecting the top of the list. Yet somehow for me it was a really easy decision, and if you follow my Instagram you probably already have a good guess too. That’s right, Bone Up Brewing is definitely my favorite place to stop in and have a beer from 2017.

It all starts with a welcoming atmosphere. Their standard beers are incredible, they’re constantly pushing out an excellent rotation of seasonal/experimental brews (they might be upset if I don’t mention my affinity for their El Pulpo at least once, love me some El Pulpo) and they’ve almost always got things happening on the weekends to feed and/or entertain you. The good folks at BUB Co. are great at what they do, so make sure if you haven’t paid them a visit, you do so ASAP. I know I’ll be back after sober January is through.

I’m changing things up slightly in this new year.

First, “What’s Going Down This Week” has official been discontinued. I’ll now just be sharing events on Facebook & Twitter. So make sure you follow me on each if you want to stay up to date with what’s happening in the area.

Next, I’m going to attempt something stupid, new content at least once a week! Most likely, you’ll be seeing this in the form of my bread and butter, new guides! I do have a couple other ideas the hopefully you all will be into. So be on the lookout for fresh content in February.

As mentioned previously, I have a bunch of breweries that for one reason or another never got a write up, and I’m planning to fix that. So expect write up’s on Lamplighter, Wormtown, Tilted Barn, Slumbrew, Widowmaker, Moon Hill, Jack’s Abby, Trinity, Sam Adams, Harpoon, Moat Mountain, Foolproof & Liquid Riot.

Also, I will be trying to fulfill my wishlist of places I still somehow haven’t been. So soon enough, you might see places like Aeronaut (hopefully there won’t be a line out the door and 3 degree weather next time I try), Long Live Beerworks, Hill Farmstead, and New England Brewing Co. (along with hopefully more CT) and maybe even some western Mass (looking at you Amherst, Fort Hill, and Vanished Valley)!

So beer, I’ll be seeing you again February 3rd after 8 hours of obstacle running in Vermont at Shale Hill’s Polar Bear Challenge, sadly meaning I’ll miss Extreme Beer Fest. I question my decision making skills as much as you probably do.

Now all I have to do is figure out which beer to drink first.