Last week I attended the Craft’d Company‘s Beers With the Brewer night held at Dorchester Brewing* on Wednesday, which was a really cool event. For the price of admission, you get a full pour of a beer of your choosing (although there is a featured beer), a snack (we got soft pretzels!) and got to hear from Todd Charbonneau, DB Co’s head brewer. Todd told us all about the beginning of the brewery and how he got started; he’s one of the handful of past Harpoon brewers in the area that are now doing off their own thing. Hearing from someone who was at the forefront of the craft beer wave is always super interesting!  It’s was a night full of great beer and fun talks among other avid craft beer fans. I highly recommend you check out one of their future events!

And now, I welcome you back to my popular series “How Have You Never Heard Of…?”, where we waited over an hour to bring you Bissell Brothers!

I find myself in a bit of a conundrum. I hate lines, and I hate the idea of lines. I’ve always been of the mind that no beer is valuable enough to waste hours of my life sitting around for. I’ve heard stories of folks waiting 3 hours at Treehouse before, which is ridiculous; I’d rather my parents tell me about the night I was conceived in graphic detail then sit through that. Yet there I was, on a beautiful Saturday morning Portland, at the very end of the line for the release of Seed; which is the annual super berried (it’s brewed with “over 2,000 lbs of fresh strawberries & raspberries”) release from the wildly popular Bissell Bros. Brewing. As much as I despise the idea of lines, I’m also a complete and utter sucker for hype. Having first tasted their flagship Substance ale on my last trip up there (at Nosh, which is an awesome burger place in case you’ve never been) only reinforced the hype even more. I for sure knew that I had to see if the hype train was worth jumping aboard. 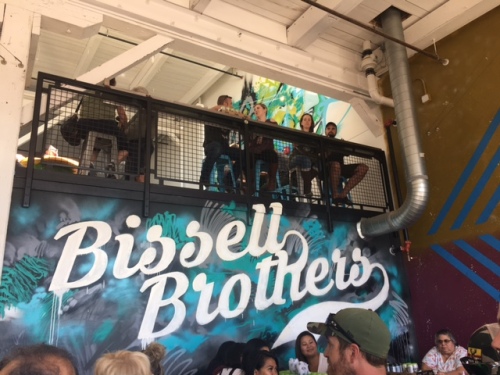 I’ll begin with stating this was the longest I’ve waited for beer, clocking in at around an hour and a half, but it also might have been the most fun. The people we were closest to in line were cool and we had many fun conversations, made the time pass by much quicker (even if they had initially lied when they said the line out back was shorter, all was forgiven). One of my favorite things about my time in line, aside from getting my max allotment of course, was that behind the two registers was co-owner Peter Bissell, grabbing the orders himself and very sincerely thanking each person for coming and supporting them; A+ stuff right there. 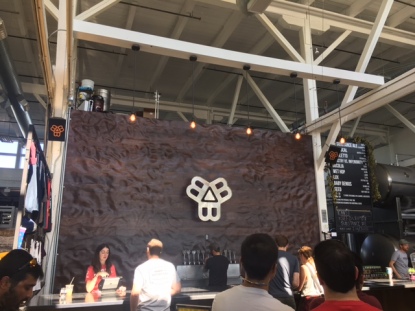 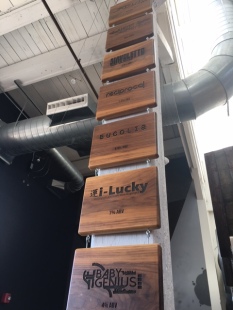 With allotment in hand, it was time to give the taproom a shot. They have a great setup, plenty of seating a real nice patio area and a cool loft section. Even with the place being at capacity, the vibe wasn’t lost on me. I’d really love to see what if feels like on a non-can release day. For a place with lines like this, their offerings were still plentiful with 9 beers on tap. We opted to just do four 5 oz. pours since we had much more drinking to do that day (being in town for Beer Meets Wood and all). My favorite of the four was Lux, which uses rye malt to add a distinct spice character to an otherwise super juicy and smooth hopped beer. Speaking of juicy, the lady’s favorite (and probably my very close second) was Reciprocal Australian IPA, which is full of pineapple and citrus flavors blended with a subdued but still very present hoppiness. It’s not often I see her eyes light up with an IPA, but this one got an immediate “Wow”. Frankly, “wow” describes their beers in general. Baby Genius and Industry vs. Inferiority were excellent too and not far at all behind our two favorite. And I can also confirm that Seed is a very well done sour, that balances out with enough juicy sweetness where you can enjoy a few of them and not get a “Sour Patch tongue” like some sours cause. Safe to say, not a single bad beer was to be had on that day. 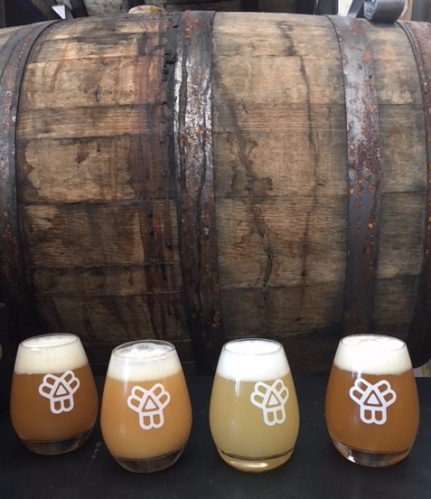 If you’re one of those people who are turned off by the idea of waiting in line, trust me, this is one is totally worth it. I also hear that if you go on Sundays, the crowd isn’t bad, so there’s really no excuse.

Bissell Brothers can be found at 4 Thompsons Point #108, Portland, ME 04102 and at http://www.bissellbrothers.com/

*Full Disclosure: Craft’d Company allowed me to enjoy the Beer With The Brewers Event free of charge. In no way was this a pay for play and all thoughts are of my own volition. Takes more then event tickets to sway my journalist integrity, of what little I’ve gained thus far. So trust me, it’s an awesome event!

One thought on “Bissell Brothers Brewing Co. – Portland, ME”